Citizen Jane: Battle for the City

Citizen Jane: Battle for the City is a story about our urban future, in which nearly three-quarters of the world’s population will live in cities by the end of this century. The film is an official selection of TIFF, DOC NYC, IDFA, Winnipeg Architecture + Design Film Festival and we are thrilled to present this FREE community screening in partnership with London Society of Architects, Urban League of London, and Wolf Performance Hall!

In 1960 Jane Jacobs’ book The Death and Life of Great American Cities sent shockwaves through the architecture and planning worlds, with its exploration of the consequences of modern planners’ and architects’ reconfiguration of cities. As urbanization moves to the very front of the local and global agenda, this important new documentary film retraces the battles for the city as personified by community activist Jane Jacobs and New York 'master builder' Robert Moses.

Many of the clues for formulating solutions to the dizzying array of urban issues can be found in Jacobs’ prescient text, and a close second look at her thinking and writing about cities is very much in order.

“Cities have the capability of providing something for everybody, only because, and only when, they are created by everybody.” ~ Jane Jacobs, The Death and Life of Great American Cities

Reviews
93% - Rotten Tomatoes
5 Stars! "excellent" - NOW Magazine
"gorgeous, tightly written and entertaining" - Globe and Mail
"Jacobs and Moses are no longer with us, but their urgent points of view live on." - National Post
"Anyone interested in the way cities work should hop the TTC and go to see this." - Toronto Star
"Anyone interested in the way cities work should go to see this." - The Weekly News
"an engaging look at the mid-century civic activism that shaped Jacobs' influence as a 20th-century thinker." - Urban Toronto
"A documentary that should be seen by anyone interested in the future of cities" - Georgia Straight
"When the famed observer of cities took on the planning establishment, it was a street fight for the ages — one captured in a timely documentary." - The Tyee 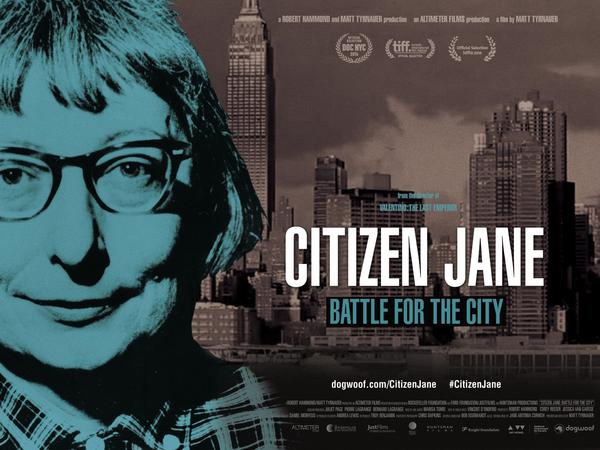